Colonies of Rock Spikemoss – Selaginella rupestris – have lived on the top of Zeagle’s Rock for many years.  Over the past decade of consistent drought, the colonies have declined in abundance and vigor.  However, with the return of frequent rains this spring and summer, the colonies are recovering and spreading.

Selaginella rupestris has the widest range of the Spikemosses, with scattered occurrences in the Piedmont and Mountains of North Carolina.  It grows primarily on exposed rock and granite outcrops, but can also be found on sandy soil or gravel.  Rock Spikemoss can become  desiccated in severe drought and recover completely when rains return.   Although often mistaken for moss and overlooked, it is a true vascular plant, related to ferns and clubmosses. 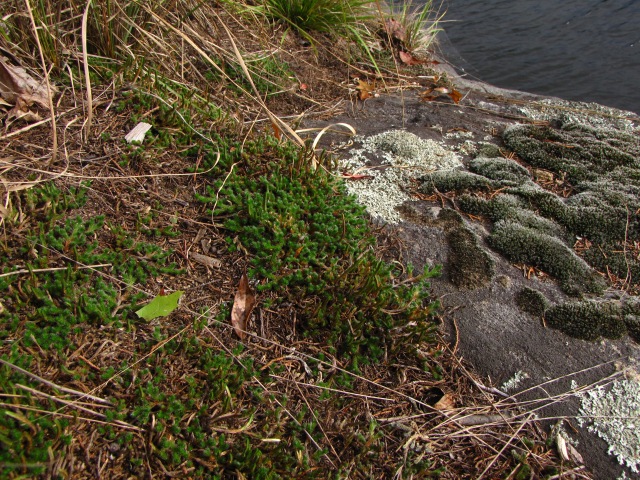 Selaginellas are creeping plants with ascendant stems.  In the following two photos, note the branching stems and scale-like leaves.

Other colonies of Selaginella rupestris, in much larger numbers, can be found on the granitic flatrocks of the Mitchell Mill State Natural Area about 20 miles east of Rockcliff Farm.