For years, the densely forested areas of the B. W. Wells State Recreation Area have been home to nesting Black Vultures and Turkey Vultures.  Until the past few years, the vultures often nested in remnant buildings on abandoned homesites.  But most of these have now collapsed from age and falling trees, causing the vultures to use nesting sites like hollow trees and sheltered ground in dense thickets.  One such site near an abandoned road has been used by a pair of Black Vultures every winter for the past 4 years.  The hollow tree pictured below is completely open at the top.  The birds lay their eggs directly on the ground with fallen leaves serving as the only lining.  Black Vultures have been on the nest in this tree as early as January 29th, but eggs were probably not layed until weeks later. 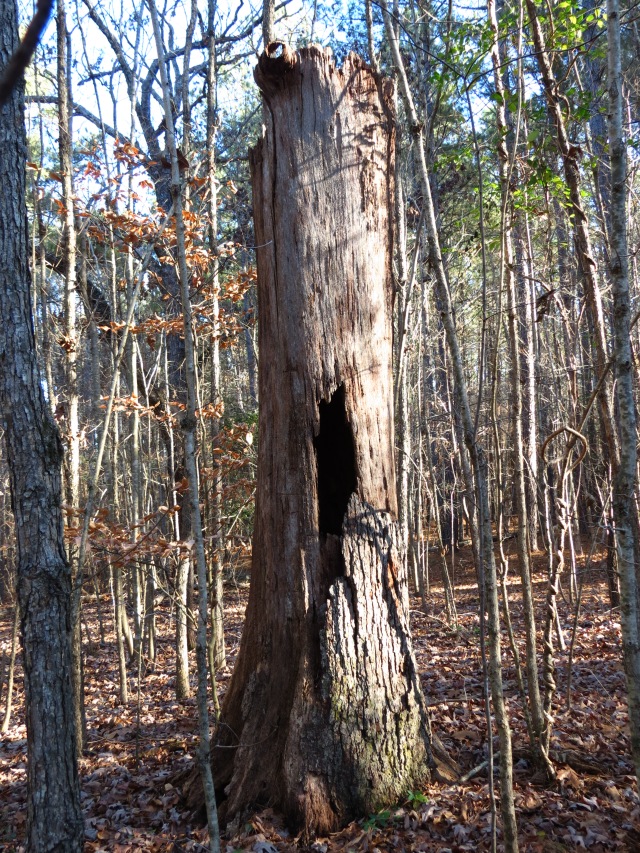 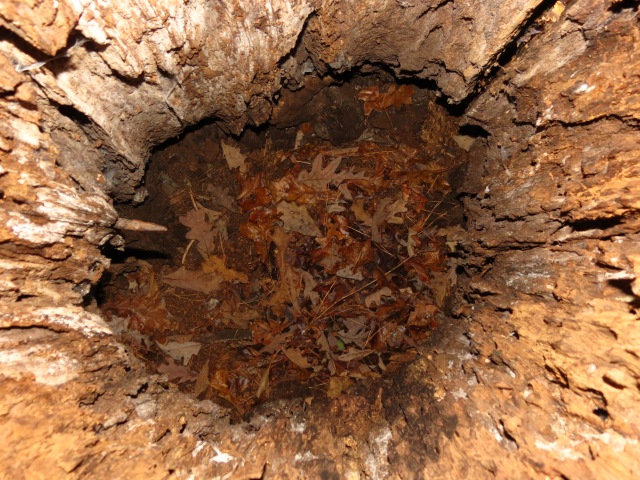 When the nest is occupied by one of the Black Vulture pair, the other stays in the trees overhead and does not fly away when the nest is approached.  This area of the B. W. Wells S.R.A. is seldom used by hikers, so the nesting site is rarely disturbed.

More recently, the Annual Breeding Bird Count sponsored by the Patuxent (Md) Wildlife Research Center showed that Black Vultures in North Carolina increased by 150% from 2000 to 2010.  Turkey Vulture populations increased as well, but not quite as dramatically.  Although gradual climatic warming trends are often mentioned, historically high deer populations and the adaptability of Black Vultures to humans and suburban habitats are very  important factors in the population increases.

Black Vultures are not migratory, but populations shift regionally, resulting in high concentrations of birds at various times.  This is particularly evident in the eastern portions of the Falls Lake area.

Vultures are the winners in the inevitable clash between dense deer concentrations and heavy suburban traffic.  Seen below are concentrations of Black Vultures at a roadside deer kill near a suburban business park in Wake Forest, NC.  The vultures ignored the pedestrian traffic under the trees and directly adjacent to where they were feeding.  Notice the white wing tips on the birds at the top of the tree. 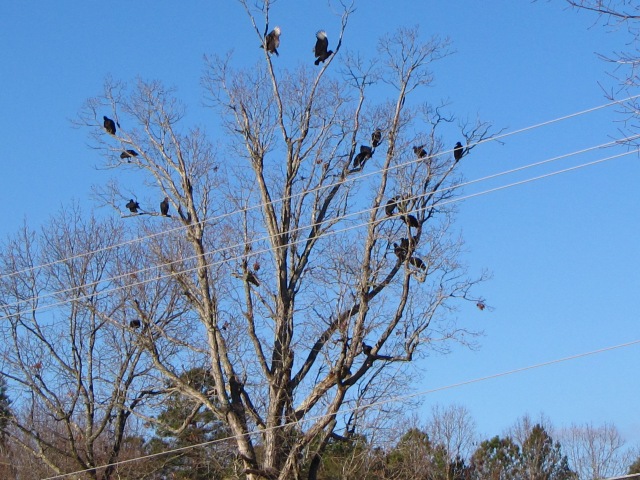 Black Vultures in a Tree Near a Deer Kill 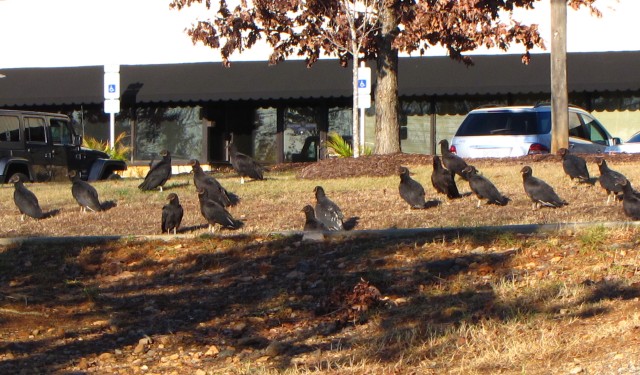 In a scene reminiscent of the African veldt, a large concentration (approx. 55) of Black Vultures gather at a deer carcass just off of Capital Blvd, one of the heaviest traveled roads in the Raleigh, NC area.

Black Vultures at a Deer Carcass Near Heavy Traffic

Closer telephoto views confirmed that all the birds were Black Vultures; no Turkey Vultures seen. 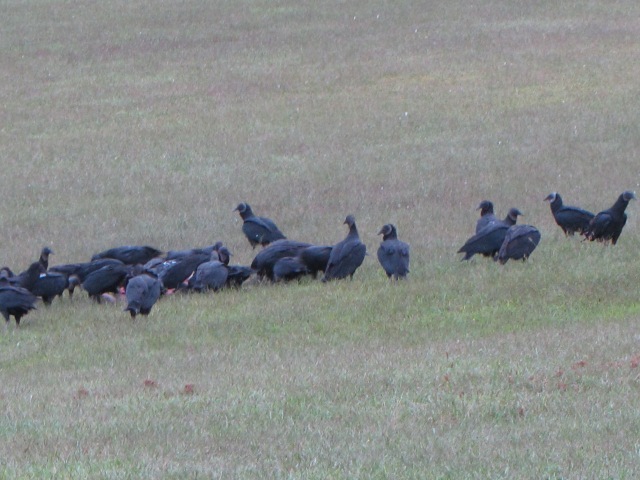 Large Concentration of Black Vultures at a Deer Carcass

In the town of Wake Forest, N.C., large concentrations of vultures roost overnight in stands of dense pines, and then fly to the town water tower to catch the early morning sun.  Telephoto shots of  each level of the tower, front and back, help to get an accurate count and to identify the species of vulture.  Over 100 have been seen on the tower in several past counts beginning in 2011, with a ratio of approximately 3 Black Vultures for every 1 Turkey Vulture.  In a grim bit of irony, the water tower overlooks the Senior Center. 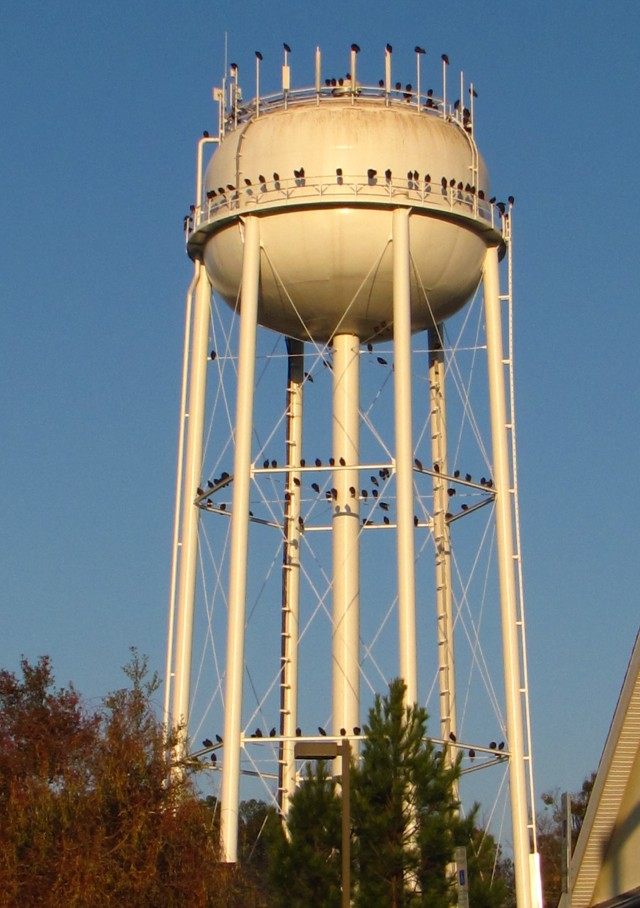 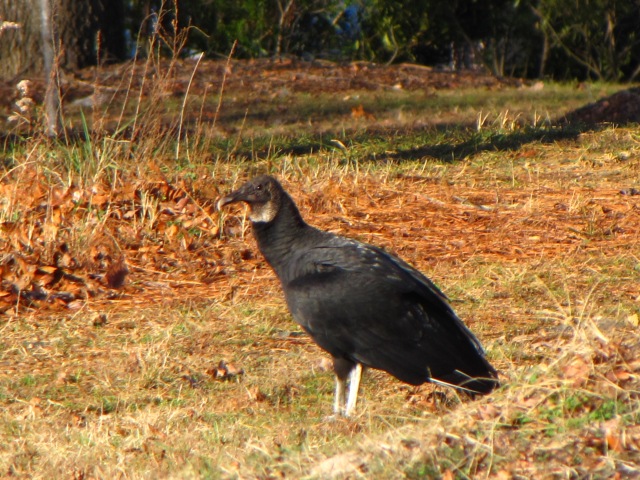 Soaring Black Vultures have distinctive white patches on the tips of their wings. 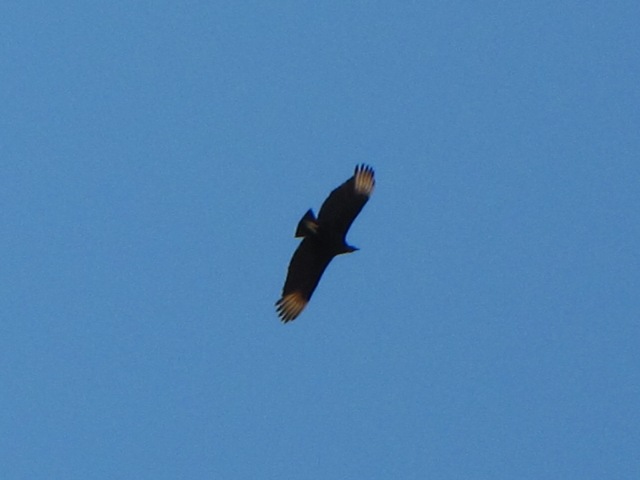 Soaring Black Vulture Seen From Below

The entire trailing edge of the Turkey Vulture’s wing is white, as shown by the bird below drying its wings in the morning sun. 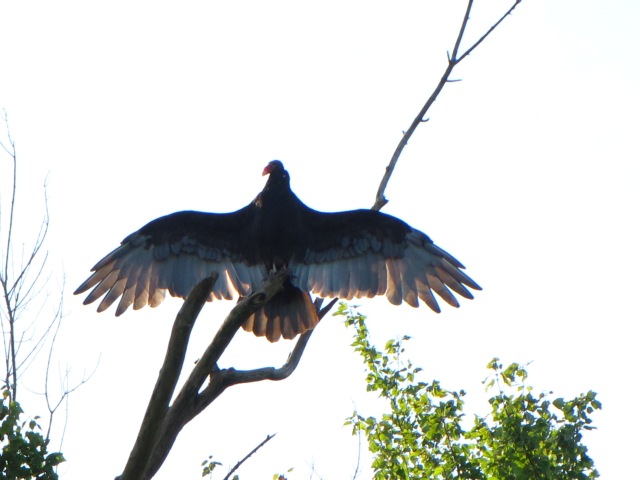 Black Vultures flap their wings much more when soaring than Turkey Vultures.

Black Vultures tend to soar higher, with wings held flat and slightly forward.  Turkey Vulture wings are held at a dihedral angle (forming a V shape, with the wing angles slightly above the horizontal).

Turkey Vultures teeter slightly from side to side when soaring, while Black Vultures tend to remain stable.

The vulture counts referenced in the article are part of the Falls Lake Bird Count, held three times a year – spring, fall and winter (Christmas Bird Count) throughout the Falls Lake area.  These counts are affiliated with the Citizen Science initiatives of the National Audubon Society and the Carolina Bird Club.  This winter marks the 115th consecutive year for the Christmas Bird Count.

6 Responses to Black Vultures Are Thriving in North Carolina