Draba verna, Early Whitlow Grass, is not a grass at all, but an herbaceous winter annual, a member of the large mustard family, the Brassicaceae.  The Whitlow part of its common name came from its purported medicinal qualities for healing Whitlows.  Whitlows are boil-like infections of the tip of fingers or toes, and are usually caused by Herpes simplex virus, making it highly unlikely that its medicinal qualities were effective.

Small populations of Draba verna were noticed this past January in three separate locations in Wake County, NC.  Each location was a granitic flat rock community and the populations of about 10 to 15 plants were each at a barren edge of a flat rock, in poor, sandy soil.  A typical cluster of blooming plants can be seen in the photo below.  Magnification makes the coarse sand look like gravel.

Draba verna is very small; its basal rosette of leaves is only about 3/4 of an inch to an inch in diameter.  The plants  are very early bloomers in North Carolina, blooming in January and early February. Draba verna is non-native, introduced from Europe into the U. S.

The plants are often bright red,  as seen below.   Draba verna is very hairy , and all the leaves are basal, leaving the short blooming stems bare.  These plants can also be found in disturbed areas and dry roadsides in addition to granitic flat rock habitats.

Each flower has four petals, but each petal is so deeply cleft that the flowers appear to have 8 petals rather than four.  The deep clefts in the petals can be seen in the photo below.  On the left side of the picture, a young Diamorpha smallii (Elf Orpine) can be seen. 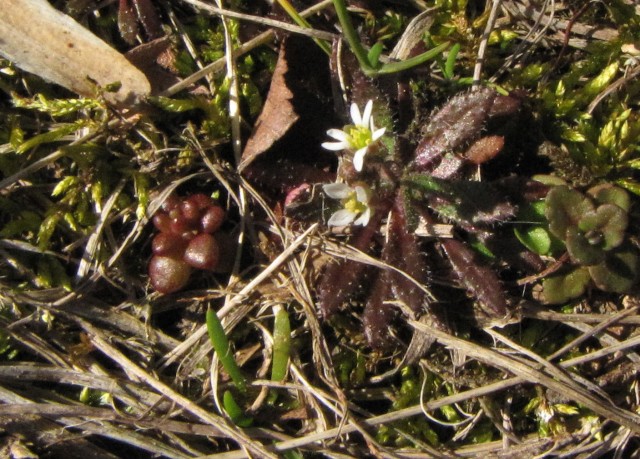 Abdra brachycarpa (Little Whitlow Grass) is a close relative of Draba verna, and was formerly in the genus Draba, until being split off recently into the genus Abdra.  Spoken together, they sound like something from the Arabian Nights!  Abdra brachycarpa can be seen below growing through a crack in a brick walkway at the Kerr Lake Visitor’s Center.

A closer view shows the flowers have four petals, with a slight, superficial cleft at the end of each petal.  Although it is called “Little” Whitlow Grass, it is larger than Draba verna and a little easier to see.

Why is it that so few people notice the individual plants that surround them outdoors in their daily lives?  For most, plants are merely a backdrop to the people, animals and equipment found in parks and recreation areas.  To explain this phenomenon, botanist/educators James Wandersee and Elizabeth Schussler coined the term Plant Blindness in 1998.  While there are many contributing factors to plant blindness, the simplest way to think about it is to understand how our brains visualize our  environment.

Put simply, our brain ” searches for movement, conspicuous colors and patterns, objects that are known, and objects that are potential threats. Since plants are static, blend in with the background, and don’t eat humans, they generally don’t get visual attention.”
“There is a kaleidoscopic array of visual information bombarding our retinas every waking second, and plants are so easy to ignore unless they are in bloom,” Wandersee says. “Plant blindness is the human default condition.”  *

Plants the size of Draba verna add size dimension as an additional complication.   Even professional field biologists can be forgiven for missing this plant.  After all, avid wildflower enthusiasts are not looking for blooming plants only one inch high, in January, in barren areas.  And consequently,  location  charts may understate its existence and distribution as well.